On 08.01.2021 at around 2 p.m. Central European Time, a sudden voltage drop in south-eastern Europe caused a disturbance in the grid frequency in the continental European high-voltage transmission grid. This disturbance almost caused a blackout in Central Europe. Thanks to functioning safety precautions, however, such a catastrophe was avoided and hardly anyone noticed the near-blackout.

However, incidents like this underline the enormous importance of appropriate safety precautions and measures.

ENTSO-E is the association through which all transmission system operators are interconnected with their high-voltage grids throughout Europe. This enables interconnected electricity trading – be it the purchase of missing capacities or the sale of surplus electricity.

In a press release ENTSO-E announced that the south-eastern part of the interconnected grid had been separated from the continental part. However, the separation could be resolved again after about an hour.

EFFECTS OF THE VOLTAGE DROP

In Romania, voltage drops and grid fluctuations occurred on 08 January. As a result, the continental grid interconnection was divided into two island grids: Southeast Europe and Central Europe. The disconnection of the sub-grid had a clear impact on the grid frequency: it dropped from the targeted 50 Hz to below 49.8 Hz within 14 seconds.

If the grid frequency had fallen below the value of 49 Hz, automatic load disconnection – i.e. the disconnection of end consumers from the power supply – would have occurred. Only the rapid supply of power reserves by switching on fast-starting gas-fired power plants luckily prevented the blackout.

However, sensitive infrastructures such as servers and automated production plants can suffer considerable damage even from these supposedly minor frequency fluctuations. This can lead to a system failure and thus to the interruption of critical processes. 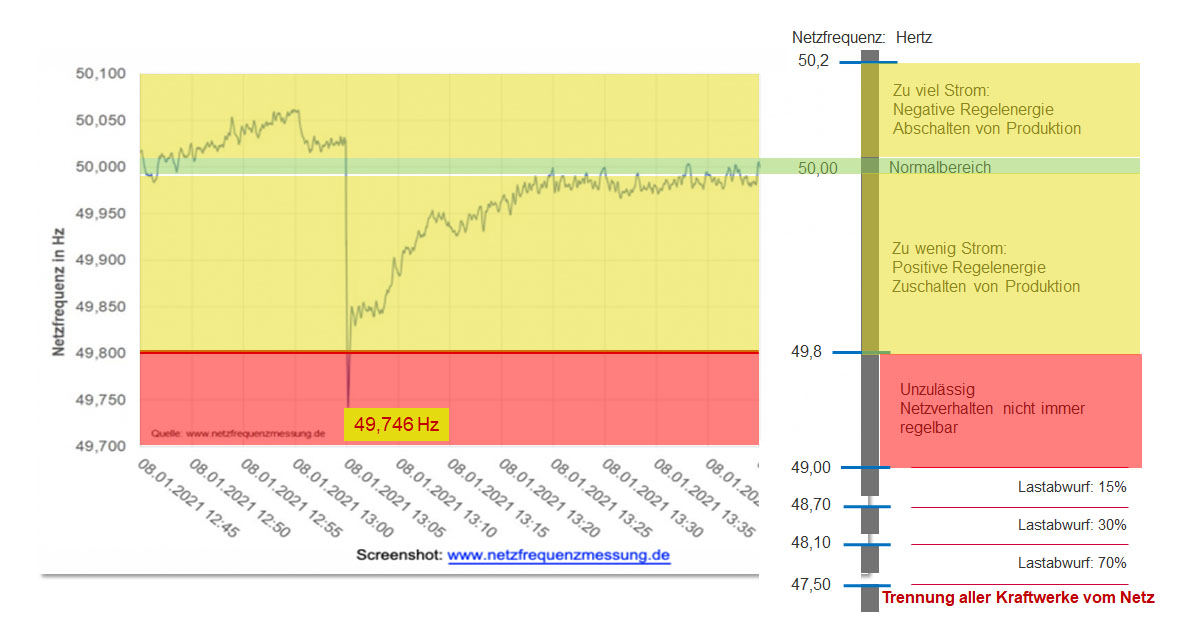 PROTECT YOUR PROCESSES AND COMPUTER SYSTEMS

Especially in winter, the risk of such near disasters is increased:

Additional strain due to the Corona pandemic:

Throughout the construction and planning phase of a data centre, complex requirements and factors must be taken into account that have a long-term impact on the quality, availability and operational reliability of the data centre. We support you in every single phase of your data centre's lifespan.

This knowledge can also be applied to any other application of mission-critical infrastructure. Arrange for your infrastructure to be audited: